Duplicate files on the cloud [NOT initial setup + reproducible with script]

Duplication issue has been raised several times on the forum. I’d like to distinguish this post by emphasizing that this bug happens OUTSIDE of initial sync. It’s NOT “filename (2)” kind of duplicate on local computer. And I can reproduce this issue consistently with scripts.

To reproduce this issue:

Note: step 4 and 5 may be interchanged, but step 3-5 must be done in rapid succession. Folder C could be placed anywhere in Google Drive, but in practice placing it as a subfolder of folder A seems to have a higher success rate of reproducing the issue.

Expected result:
Files in folder A are updated with files originally in folder B

Actual buugy result:
On local computer, everything is still fine. But on the cloud, the original files in folder A may not get deleted nor moved to anywhere else, while files originally in folder B are still added to folder A, resulting in two sets of files with the exact same names. The original files in folder A become “zombies” that are stuck in the cloud and can never be accessed, modified, synced or deleted locally by Insync.

How this was discovered:
I noticed the duplication when I was using FreeFileSync. It uses a similar procedure to update folders it syncs. The procedure acts as a fail-safe file copy that prevents data corruption.

My script:
I wrote a Python script to reproduce this issue. It can be found here.
The script would repeat this procedure for a number of times. Not every time is guaranteed to have duplicates for all files, but at least half the times there’d be some more duplicates.

Can you send in your logs as well to support@insynchq.com along with the link to this post?
How to find the log files

Hawk, I hope you help us settle this issue once and for all! I’ve gotten similar issues in the past, but didn’t have it as well documented as you did. You’re doing the entire community a favor. Thanks!

Bump
checking on progress if any
@dipesh

A recognition of the problem would be a first step.

@Hawk I will try replicating this issue using your script and update you by next week. Sorry for the delay.

bumping again. Ran into what appears to be the same issue. Thanks to @Hawk for the clear post. 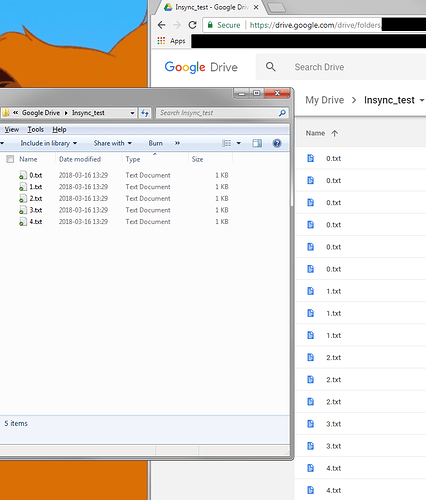