Currently I wish to ignore two extensions *.raw and *.log BUT only if they are under a specific “root” folder.

where ** should match ANY folder(s) (even no folder). However I’m seeing files being synced regardless.

Is the .gitignore syntax only partially supported? This git feature is ~10y old

Thanks in advance for any tips / help

The rule seems to be correct. I just tried it on my end, in this case with PNG files and they are ignored upon entering this rule: Root Folder/**/*.png.

Can you please send the screenshots of where these .raw and .log files are in your folder hierarchy? You can email them to support@insynchq.com with the link to this post.

Sure here are the requested screenshots 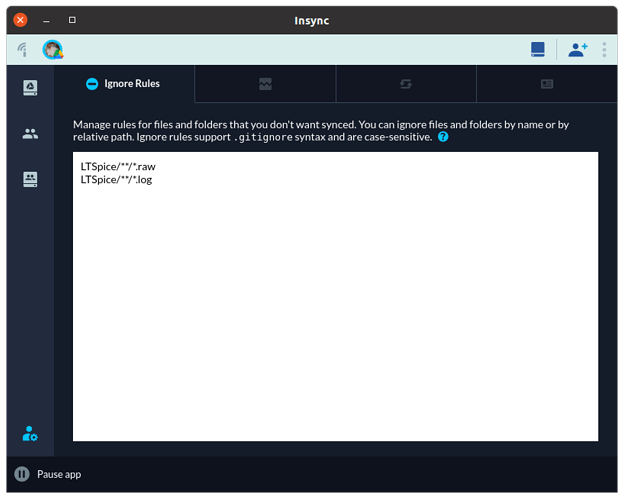 Full path of the folder + creation of test file

The test file gets updated

Upon further reading of Git Ignore Pattern Documentation I found out if I defined a path (rather than a single directory), it is considered as relative to the ‘root’ folder.

Therefore, my mistake.
Thanks for the assistance!

Ah! Wonderful to know that you got this sorted out

Thank you for the update, I appreciate it @aleperno.