i switched back to google drive and downloaded insync on Ubuntu. I realized version 3 was on the site and proceeded to set it up, then the problems started.

First it was changing the location of the drive folder during setup, which still pointed to the default after setup, had to point again to custom location for syncing to begin.
Then after a while of syncing the app freezes, i force quit and start again and same result.
There is also a lot of options missing like its still in beta, why would such a buggy version be the default download?

Now on windows i have the same sync folder problem, along with missing graphics from the insync program and missing icons from windows explorer while insync is running. 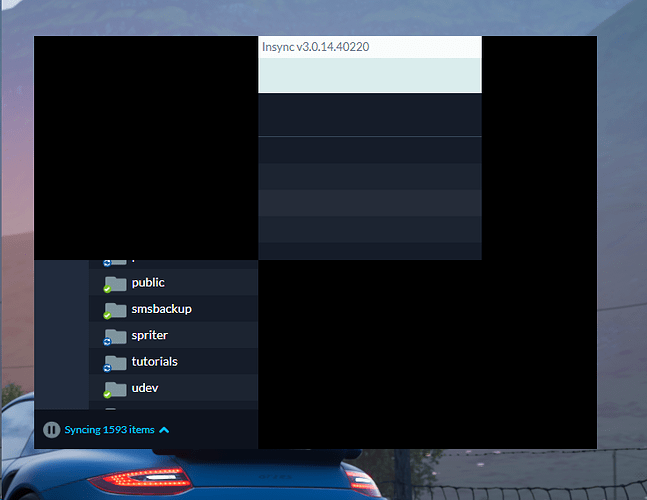 So sorry for all the bumps you encountered on this build! We’re working on an update which includes fixes on the UI issue and sync performance. I’ll let you know when this has been rolled out so you can give it ago.

Thanks for the patience.

Thanks for the reply, will be waiting for the update!

in my case, the graphics directly doesn’t work after a few minutes. Just now rollback to 1.5 version.

On Linux this is the case for me also.

Let me know how it goes!

Exactly same issue on Windows 10. The software is absolutely unusable

For me ver 3 was a terrible experience. Lots of graphical glitches. Then my whole system was stalling. Steam download went down from 100 MB/s to 40 kB/s. Then I was not able to see “This PC” content. In the end I uninstalled v3 and went back to 1.4.9.

And one more thing. Who on earth invented 10 or more concurent downloads that you can not configure how many downloads you want to have in parallel? Extremely poor solution.