Hello, I have installed insync on my ubuntu 22.04 server. There is a weird bug with file synchronization. Currently, insinc is set up to synchronize only one dropbox account. 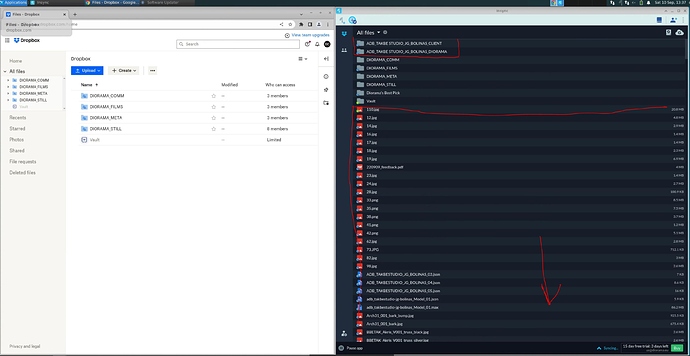 Could you let me know if you selected an existing local folder as your Base Folder (aka sync location) where those random files are housed?

Yes i did, i made another folder on secondary hard drive and change a default sync location to that folder.

I see. If those files were already present on the secondary hard drive prior to changing the default sync location, then it sounds like Insync did file-matching to see what’s in the cloud and in the local folder. Whatever is present on both sides are matched, and whatever is not on either side is uploaded/downloaded.

It looks like this is not the behavior you wanted after changing the sync location. How did you imagine the flow to be like instead?

Hi Mia, i have created an empty root folder and set it as default for syncing.
Those files that are synced in the root folder, when I open them directly from insyc to check online location, they open in completely different places, and they are not located in the default root folder online.

@uroskg Hi! What I’m understanding is that the sync location in the secondary hard drive was empty and yet these files randomly populated the root of your drive. Did I get that right?

Here are some more clarifications, please take a look at the screenshots

-In Screenshot 02, for instance, folder KAOSS from root folder was opened with insync to locate files on dropbox web and in firefox it results in location: Dropbox(root) / film mont sainte-odile / son warren / kaoss. So it is definitely not placed in the root folder according to our web dropbox hierarchy. However, insync has synced that folder in the root.

-In Screenshot 03, you can see the list of files synchronized with insync in our root folder. So there are files that even insync doesn’t recognize in the root folder. Somehow they disappeared from the list in insync application.

What we have tried:
-Removing files from root folder synchronized with insync. This removes also those files from dropbox web which are placed in a different location.
-Reinstalling ubuntu. The same problem with synchronization occurs even after a fresh installation of ubuntu.

@uroskgi appreciate you so much for the detailed walkthrough. We’ll need to investigate this further. Could you send the following to support@insynchq.com please:

On Ubuntu, the log files should be in ~/.config/Insync. You can upload them in the cloud and send a shared link if they’re too big as attachments.