I just tried to restore an old version of a certain file on OneDrive, but then Insync rejected those changes because I had told it to “keep local changes and upload” for conflicts with a later local edit. But this was a later cloud edit. It should be pretty obvious that they should have a different setting, because later local edits and later cloud edits are completely different conflicts.

Hi! Thank you for bringing this up! Both options should be visible in your conflicts settings. We’ll look into this and get back to you.

Thanks, I appreciate that.

Hi! Did you change your settings for Conflict “Keep local/cloud changes and upload/download”? You can check that out here: 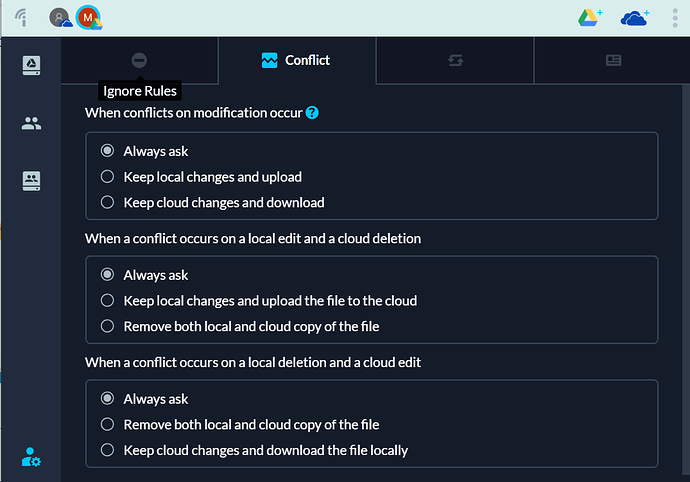 Regardless of which changes are the latest, the app will apply which settings you chose for automatic conflict resolution. Right now, we don’t have the option to use the latest changes and apply that.

The workaround can be to change the settings to Always Ask option so you can control which copy should be followed.

the whole point of syncing is that local and cloud are the same. the latest version should always win by default.

Yeah, exactly. It should be obvious.

We’ll bring this up with our engineers so we can investigate the necessary improvements needed for our Conflicts feature.

Thank you so much for taking the time to express and share your thoughts on this behavior!

Hi, any news on this? It’s very annoying having to click through all the conflict prompts over and over and over again. I would have hoped it’d be fixed after over 6 months.

As long as auto-resolved conflicting files are put in the recycling bin instead of deleted, I see no reason to not set cloud changes to always download and local changes to always upload. But I can’t do that at the moment.

Hi @Drakinite, apologies for sidelining this issue in the last months. I’ll be requesting our team to once again look at this issue in an upcoming projects cycle.

Please make ‘always choose latest version’ regardless of whether it is local or remote the default option.

That’s what most users want and how most other sync software does it.

Happy to forward this possible improvement to our Product Team.