It seems the fedora 34 version has also been built, but there is not link in the post.

Very nice. I notice when I tried to enable 1-way-sync on a subfolder though it told me I can only do so on a top-level folder. Just wondering why that is and if this is set to change? 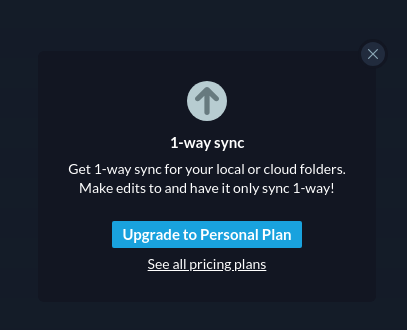 As someone who only started actually using InSync 2 months ago (although in fairness I’ve had my license for a bit under a year), I can’t help but feel a bit cheated upon seeing this…

I genuinely don’t mind having to pay up for additional functionality like this that is of value to me. But this suggests upgrading to a “Personal Plan” which actually misses features (like ignore rules) that I have (and use) with my current Prime license. So in order to get this bit of functionality without losing functionality I previously had I would need to cough up $70 for the “Company” license which is the one that incorporates all previous functionality, too. I wish this could have been handled a bit better for existing customers.

Doesn’t developer plan fit your needs? It contains ignore rules (which I use actively too).

Do you need sharepoint/shared drives support?

You can check our repos or downloads page for the F34 build.

Thank you for your feedback on our licensing, I’ll forward this to our internal team.

As for the 1-way sync functionality, we explain some limitations here. Happy to bring this up with our team as well as a feature improvement.

I’ve taken a closer look and I realised I confused “Shared Drives” (which is a G Suite feature) with just shared folders.

I still would’ve preferred if existing customers would have been automatically transferred on to somewhat-equivalent new licenses where they would not lose functionality by “upgrading” to one of the new licenses (e.g. if I “upgrade” from Prime to Personal I lose my ignore rules, which I imagine would also severely mess up the state of my folders if I wasn’t aware of this beforehand), so that we could then safely “upgrade” to get these new features at a reasonable cost (as from a user’s perspective, we had already purchased the base license with features that are no longer contained in the new “Personal” license), rather than paying more than I paid for my initial license to begin with to upgrade to “Developer”.

That being said, I think InSync is a nice piece of software and I like where the actual application is headed. I think they generally do good work, and I get value from it, so in this case I will actually upgrade to the “Developer” license (the “Company” one would have been much too steep a price increase, however).

TL;DR The license change could’ve been handled better for existing customers, but keep up the good work on the actual product.

Setting “custom” base folder (other than: “Google drive” ) is VERY difficult…
Insync doesn’t start syncing. it is possible to set configuration within a separate .ini file?
you can even backup your configuration …