Will Insync 3.x EVER support Symlinks?

I anxiously downloaded and installed Insync 3 when I got the email notification. I was a bit surprised that 3.x did not support symlinks in the Google Drive folder. Please advise if symlinks are planned for Google Drive in 3.x as they are in 1.x.

Also, please advise if symlinks are planned for or are NOW supported with Onedrive with 3.x.

This is vital for me.

Please advise, is this feature planned or fixed in Insync 3? This may determine if I stick with Insync or not. With the recent change in Google Photos not being synced I am seeing less of a reason to stay with Google drive, I may switch exclusively to Onedrive - and it already supports symlinks in the native Onedrive sync client.

Bump. I am really needing to know this. If Insync 3 is never going to support Symlinks then I amy be parting ways with it - at least until I am forced away from Insync 1.X.

Bump. I am really needing to know this. If Insync 3 is never going to support Symlinks then I amy be parting ways with it - at least until I am forced away from Insync 1.X.

At least for insync 3.0.x in windows, outside of the base directories, there is an insync context menu item to sync files/folders. This includes items in mapped network drives and usb devices. I have no idea how it functions or if it does it well as I have not tested it. But this could be an alternative, ie syncing the symlinked folders directly rather than via the symlink.

I’m definitely with you on the google photos issue. And to only provide one way sync in the native google app and not provide an API on top of it is asinine.

It is planned for Insync 3 I apologize for this. We will make sure to update you guys with the build that already supports this.

Jaduenas, thanks for the info. Hopefully Insync 3 will be stable and have the missing features soon.

Kyle: Yes this is possible. It’s just a bunch easier to use a symlink. And I’ve been doing it for years. Thanks for the tip. I’m sticking with Insync 1.X for now until 3.x is more stable.

Any progress on this? It’s almost a year later. I accidentally upgraded to 3.0 without knowing that symlinks no longer work.

Hi! Symlinks can be synced via Local Selective Sync (on the upper right of your app UI). Let me know if this works on your setup

I have to admit I have not tried version 3 since it’s first release.

Bump.
Just to let you know, there are more than a few people who desire this feature. While we know that we can sync other locations we really want REAL symlink support.

I am just curious, is this such a hard feature to make work? It works perfectly in Insync 1.X.

Insync 3 - support for symlinks available yet? Bugs and issues

Yes and not (since my experience). I created symlinks inside the default directory. But as you, it didn’t work as in the previous 1.5 version. I had to “unsync” each desired directory and proceed with “Local selective Sync”, selecting the folder to sync, and select “Sync directly under My Drive”. After that, it started to sync but I found an issue with this that I will report in a new post.


I actually deleted the symlinks inside each folder account and later, do the same steps I described above. 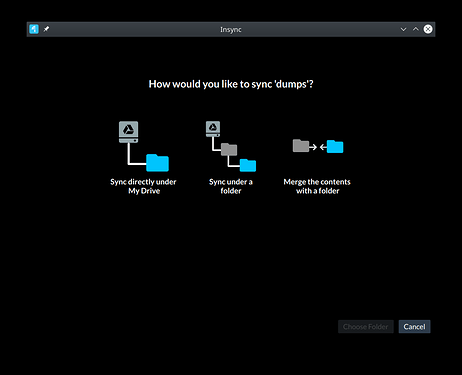 imagen1130×917 26.1 KB
I selected Sync directly under My Drive, then I don’t need to create a Symlink inside the original Insync directory. I think it is still better except when I decided to unsync the folder because it or its content will be DELETED from my laptop, here is where Insync people still has ignored my feature: Don't delete files on stop sync
bludgrumber December 14, 2020, 6:35pm #11

Here’s a proposal I sent in through the support channel as a way for our Insync developer friends to add symlink functionality to 3.x. I’ve also posted it here for your reading pleasure, and to solicit “likes” to help indicate demand.

Neither Google Drive nor Microsoft OneDrive seem to support true symlinks, so this proposal allows local (Linux side) use of symlinks, with Insync storing their metadata as a normal file in Google Drive or OneDrive.

For the rest of this post, I’ll use “$cloudDrive” to indicate either Google Drive or Microsoft OneDrive.

Here’s how it works:
On the local Linux file system you have a symlink, such as /home/user/images which points to a target of /var/lib/images. For this proposed solution, it doesn’t matter if the target is a file or a directory.

So what gets put into the symlink metafile on $cloudDrive? Here’s an example:

When Insync is syncing from the cloud to the local file system, it simply re-creates the local symlink based on the metadata.

Hi, I wanted to check if there is update on this? I have just upgraded to version 3.x without realizing that symlinks are not supported. Manually syncing each folder would be tedious and error prone.

Two and a half year later and still nothing…

we are finally getting back to symlink support and the initial implementation will have 2 options as a global setting:

questions: let’s say you initially followed the symlinks (i.e. it would sync the target) and say a week later you changed the setting to ignore…

Hey there! Any update on the symlink support?

Hello! Still in the works

We’ll update when we approach its release.

I am considering dropping Insync after many years of successful usage due to lack of symlinks support. Which is kind of sad, considering that Insync is of the BEST app in this domain. I can live without symlinks but some Linux/Unix applications use symbolic links negatively. I know that rclone supports symbolic links. I will look into it let you know.

Hi! I understand the sentiments, and would like to thank you for sharing about your positive experience with Insync despite the lack of symlink support at present.

There is no ETA yet, but we are looking forward to deploying this in the near future.