Insync 3.2.6 keeps scanning and not synching

Hi, I have insync 3.2.6.
After launch, it syncs some files but then goes in a mode where the tray icon goes gray and GUI keeps scanning a random folder without upload or download.
I have insync on another PC with same OS (Ubuntu 18.04) where it seems to work fine.

Below is how the system icon of insync becomes gray-

and this is how it keeps scanning a single random folder- 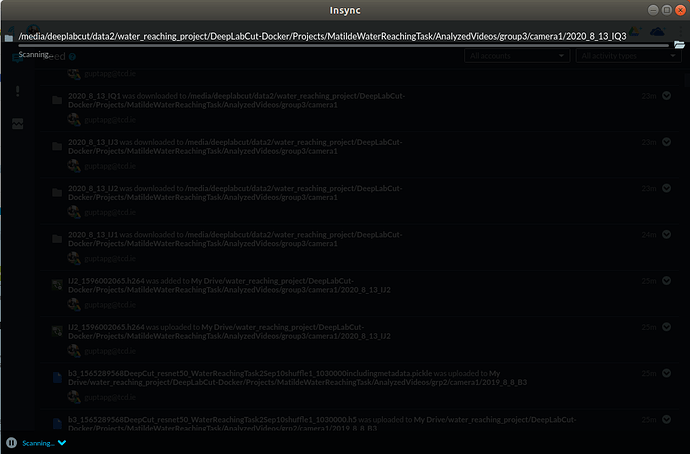 I can provide the log.db file, dont seem to be able to upload here.

Any troubleshooting would help.

I have the exact same problem, there is another thread here where me and another person report the same issue.

was there any resolution or response yet?

Hi! Our engineer is looking into this since stuck syncing/scanning is a top priority for the team. We’ll update you guys-- if you haven’t submitted your logs.db and out.txt files please do so to support@insynchq.com with the link to this post.

Thanks for the prompt reply. Yes I submitted it already.

I have the same problem here.

I’ve submitted the the logs.db and out.txt files, but just wanted to get some visibility into this as well.

I’ve also tried purging and reinstalling, reconnecting, etc., and the issue still persists. Just scans and cranks up the memory usage (currently at 1.5 GB, but I’ve seen it go as high as 2GB in memory).

At the current phase of reinstall, it’s at about 20 hours of scanning for a ~450GB drive store.

Hi guys,
I’m having the exact issue here.
The only differences are I’m using Ubuntu 16.04 and I’m running trial version of Insync (version 3.2.7.40868)
I have successfully uploaded ~ 160 GB of local data to my Google drive.
There are remaining of 30+ GB of local data pending upload to my G drive.
Now InSync is stuck at “scanning” status.
What I have tried:

EDIT:
I forgot to say, the tray icon is in green.

Exactly the same problem. Scanning takes forever with just only 45 GB of files.
Forgot to say that I had 3.2.7 version.

Our team is prioritizing stuck syncing and we have had some progress with the investigation. Are there any errors / actions required items? If so, kindly clear them and see if Insync progresses then.

For Linux users: are any of you using a network drive as your Base Folder?

Hi,
(linux user) There are no errors. If they were earlier, I had cleared them. There are no errors since a long time and I have restarted it many times but it stays stuck.
I am not using network drive. The base folder was in home drive but I added a folder from a mounted drive (not part of base folder) to be synced to my google drive. That folder from mounted drive is where the issues are.

Thanks for mentioning that the stuck syncing is happening to a mounted drive. I’ll forward this to our engineer so we can check if that’s a factor as well.

Hi Mia,
Has this issue been resolved?
Any updates?